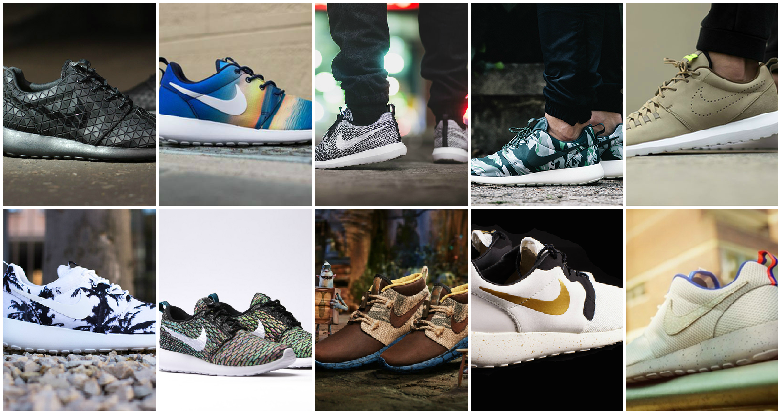 Launched in 2010, the Nike Roshe Run (recently known as Roshe One) has created a real storm in the shoe industry because of its super-classic look and very affordable price range. can also own and carry them. Not only that, Roshe Run is also accompanied by many unique color schemes, making countless hearts love sneakers for the past 5 years.

Eachshoes is pleased to present 10 Nike Roshe Run pairs that we think most deserve to be on your shoe racks.

Covering the whole body with a black color is probably not enough, Roshe Run QS “Metric” there are many more special things than that. When people still thought that Roshe Run had reached a peak of fame with Roshe Run FB and it was difficult to cause even bigger surprises in 2013, Roshe Run QS “Metric” spoke with impressive geometric motifs embossed throughout the shoe body. Accompanying an extremely limited number, this is considered one of the rarest Roshe Run versions of all time.

The only problem was time sooner or later before Nike brought its Flyknit technology foray into the Roshe Run. That’s right and not only that, it’s also an explosive move because Roshe Run Flyknit “Multicolor” has been released. Combined with rubber soles and white Swoosh hooks, Flyknit yarns are woven throughout the shoe body in vivid interwoven colors. Born in early 2015, Roshe Run Flyknit “Multicolor” has really brought Nike a huge hit in the world sneakers industry.

The hearts of us who love sneakers are no stranger to the name Tinker Hatfield – the talented designer of not only Nike but also the world of sneakers. Although not the creator of Roshe Run, but The Boxtroll x Roshe Run Mid “Trollstrike” was painted by him. Inspired by the cartoon The Boxtrolls, Tinker has brought to Roshe Run all the most impressive details with carved blue rubber soles, ropelace laces and brown dyed body with many unique details. other. Better, The Boxtroll x Roshe Run Mid “Trollstrike” They have been auctioned off for charitable purposes, making them not only of high aesthetic value but also have a very humane meaning.

Although it has a very simple and classic look, there are many versions of Roshe Run that surprise everyone with the creativity of Nike. Launched in May 2015, Roshe Run NM Woven “Bamboo” is one of them. With the combined sole of the Nike Cortez and the toe part of Inneva Woven – the mesh-mesh interwoven details, the color scheme of the gentle “Bamboo” bamboo bars has been applied to the entire body. sneakers, making a great choice for dynamic fashionista.

Nike has always been known for its unusual and creative inspiration on sneakers. One of the reasons that is thanks to the coconut palms above Roshe Run “Palm Trees” launched in March 2014. Tropical shades are shown by a black coconut canopy pattern in the clear sky that covers the body of the shoe with very sharp print quality, combined with Swoosh hook and pure white sole. , creating a beauty that is both gentle and unique Roshe Run “Palm Trees”.

Size? is a name quite familiar to the world sneakers community with explosive collaborative versions. One thing of course, they didn’t ignore the Roshe Run brand line and the results did sprout when Size? x Roshe Run “Urban Safari” was born. With a gentle earthy gray color combined with a sparkle base, clear accents on a dark green lining, striking red / green heels and a Swoosh ostrich leather pattern, Size? x Roshe Run “Urban Safari” has clearly shown the wildness as its name suggests. Perhaps that is why they created a huge fever when it launched in 6/2013.

In the collection “Hypervenom” launched in June 2014 on the occasion of the 2014 World Cup to cheer the American team on the way to conquer the gold trophy, Roshe Run Hyperfuse “Gold Trophy” immediately attracted a lot of attention from the world of sneakers. With the sound of glory, the shoes possess a very strong array of black, white and gold colors combined with a very eye-catching patterned heel pad. Under the enhancement of the Hyperfuse material layer, the same color scheme is both meaningful and extremely subtle, Roshe Run Hyperfuse “Gold Trophy” is well deserved to be considered one of the most beautiful Roshe Run versions ever released.

Surely many of us are still impressed with the extremely unique color scheme inspired by the beat of the Nike Kobe IX Elite Low “Beethoven”. Not letting that impression fade away for too long, in early 2015, Roshe Run Flyknit “Beethoven” once again provoke the hearts of sneakers with their combination of ash gray, white and black. Even better when the Flyknit interwoven layer has been applied again, the genius musician’s keys appear as hidden on Roshe Run Flyknit “Beethoven.

Santa Monica Beach, California has always been a wonderful resort destination of the world not only because of the scenery of the blue sea, white sand and golden sunshine, but also by the beautiful sunrise here. This beauty has created Roshe Run “Santa Monica” – A real masterpiece in 3D printing technology on shoe bodies. The transition colors portrayed authentically from the blue sky to the bright yellow sunlight gradually emerging from the sea. The overall balance is the Swoosh hook and the white sole, drawing one Roshe Run “Santa Monica” very special.

Camo motifs are always a great source of inspiration and have a strange magic that makes not only the designers but also the fans crazy. Not stopping there, Nike has combined the wildness of the tiger skin texture with Camo to create Roshe Run “Green Tiger”. The mixed colors of green moss, green and white are covered in the shoe body, bringing a unique feature that is hard to deny. Born in mid-2013, Roshe Run “Green Tiger” has really created a new lever for Nike in general and Roshe Run in particular.

Source: A collection of 10 versions of the Nike Roshe Run most deserved to own
– Eachshoes.com