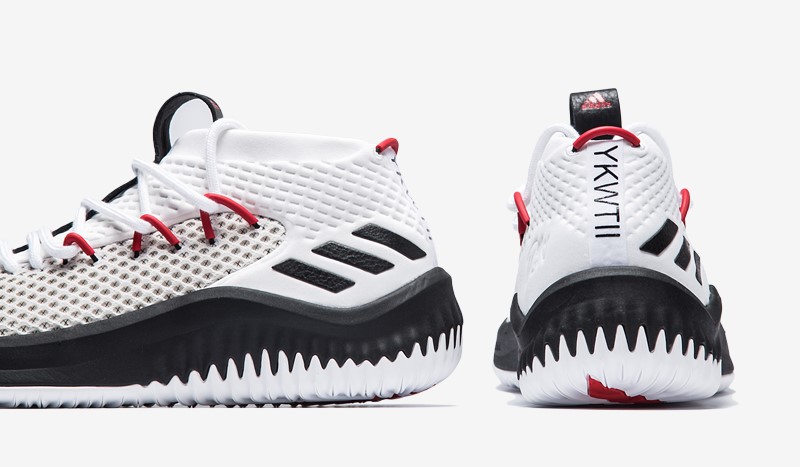 What does Ykwtii mean in Dame 4?

Holding Dame 4 in a single turn, the words YKWTII caught my eye, almost in my head it reflected the sentence “You Know What Time It Is”. Adidas has done too well in marketing for the adidas Lillard / Dame and brings a very interesting “personality” to this line of shoes. Along with the growth of Damian Lillard, we have also seen a very steady development of adidas Dame. Here we invite you to admire adidas Dame 4 review from the perspective of EACHSHOES.

Dame 4’s “The Flow of Time” base is probably one of the most unique of recent years. By creating protruding lines and cutting between them to increase the contact area, the base of Dame 4 looks “turmeric” indescribably. But did it fulfill its original mission well?

Since the number of vertical insoles is quite small, the horizontal grip is the biggest weakness of Dame 4. You will probably need to clean regularly on the dust field if you often need to brake urgently but in reality these cases are quite infrequent. Observing that some players use Dame 4 at the yard of the Medical University of Hanoi, Bach Khoa yard, they all show a stable grip even in speed spills. You should still be aware that you will brake a bit slower than usual, but in general it won’t slow you down much. The sole of Dame 4 is still in a way that gives more control than the brakes.

The so-called hard rubber material of Dame 4 with the base layer is not too thin for you to play outdoor for a while. But it is best to go limited because your couple has been peeled off only after 2 outdoor sessions, similar to Crazy Explosive 2017. A little tip for those who want to have the best indoor adhesion, then bring to the outdoor yard for a few sessions for the cleat to wear off, increase the contact area to bring the highest effect of clinging to the wood yard. The same should apply to Lebron 15.

The appearance is no different, but this Bounce material has very different changes compared to the previous two versions. Instead of a solid black layer, a shell-like soft white layer with a new Chocopie Dark core, Dame 4 had only one layer of the material. According to the fastpass, the new Bounce is spongy and is about half the lighter weight of the Dame 3’s.

The ability to support, shock-resistant of Dame 4 is still not inferior to its brothers. It is slightly more porous like EVA but still has the characteristic elasticity of Bounce. The soft, slightly subdued feel of the top Bounce layer is gone but compensates for the smoothness of each step. In terms of the softness of the Bounce, Rose 773 IV is the softest, then to Dame 2,3 then to Dame 4 with the Rose 773 V, VI, finally to Light Em Up 2.

Aside from Lillard 1, the Dame 4 is probably the simplest shoe since Bounce has been used. A layer of neoprene, a layer of fabric covering the nose and then bounce and the outsole. All the cumbersome details, the matches have been removed, leaving only what is really necessary.

The material of Dame 4’s nose changes with each color scheme. In the Rip City version that EACHSHOES tested, we have a very solid mesh fabric, but other materials such as textiles, wool or leather have also appeared on other versions.

Streamlined but not minimalistic, the materials of Dame 4 will be enough to satisfy most people. The only problem is to choose the color scheme that suits you.

How do Adidas Dame 4s fit?

The brightest point of Dame 4 is in the Fit section, which all 3 previous versions are more or less problematic. In short, the Dame 4 has been one of adidas’ most leggy basketball shoes in recent times. In a long line, these are the best neoprene shoe from adidas ever. The neck is tight like marshmallows, making insertion somewhat difficult, but as long as you get used to it, it’s easy. The neoprene layer will automatically hug your leg comfortably once you insert it.

I went to size 10.5 US at D.Lillard 2, 10 US in Dame 3 and continued to go back to 10.5 US at Dame 4. Many people think that you should be down to half size but maybe only you have narrow feet (there will be narrow, wide meaning in an upcoming post) must be half the size On the other hand, you just need to wear extra socks or thick socks if you want to feel better.

Is the Adidas Dame 4 the most popular shoe?

Perhaps only the Lebron XV offers the same feel thanks to its Battleknit class. In addition, Crazy Explosive 2017 Primeknit is not too inferior but do not forget that Dame 4 is much cheaper than the other two pairs. Another shoe worth mentioning is the Jordan Ultra Fly 2 with a similar grip.

Streamlining cumbersome details such as heel pads and foot supports and bringing them all in, Dame 4 still meets the standards in all Support categories. You won’t see anything tough from the outside, but your feet are supported as usual.

The midfoot shank placed on top of the Bounce layer made a Z shape like the Torsion System on the adidas Super.Beast and Howard 1 in the past. Adidas never mentioned this detail, but this is also a huge plus because this shank is much larger than the shoes of the same price.

The soft, spongy Bounce sole that gently wraps the feet from the nose to the heels acts as a barrier to prevent your foot from sliding out resulting in flipping. Finally, the wide, slightly rounded base surface helps to move comfortably without being too limited by the edge of the base. Dame 4 supports your legs by making it feel smoother, easier to turn and hug your feet rather than pinching in a mold.

The only point to note is that the Dame 4’s heel block is quite low and the material around the ankle is soft. If you have ankle problems as well as psychological weakness in ankle protection, you should use additional protective gear.

With prices less than $ 120, Dame 4 is in the group of the cheapest signature shoes in the NBA, but quality and performance are definitely at the top 5 of the year. The only weakness is that the grip can be improved by abrasion in the outdoor yard before indoor playing.