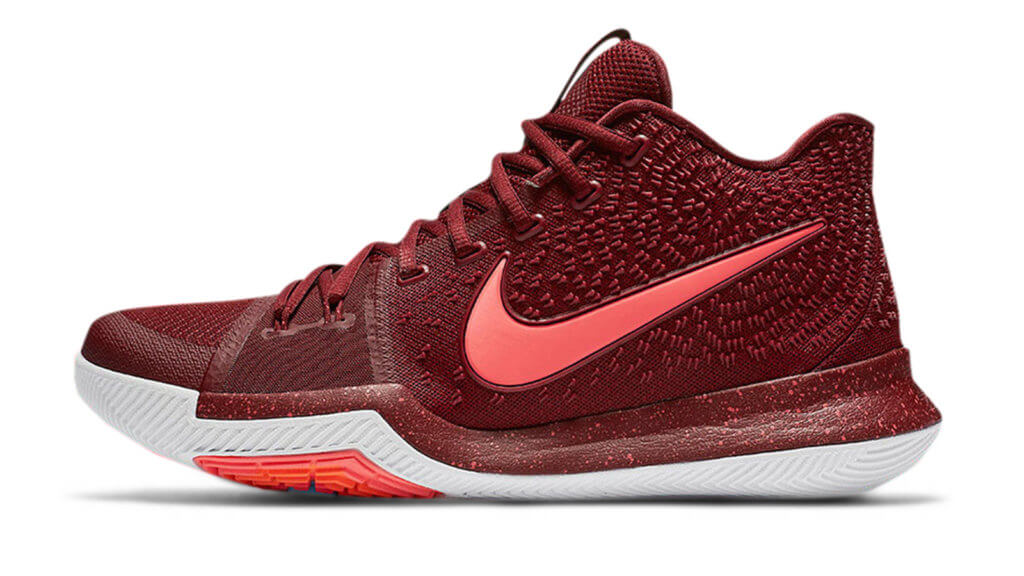 Perhaps there’s not much need to talk about Kyrie Irving: 25 years old, four times All-Star, one NBA Three Point Champion, one NBA Champion with Cleveland Cavaliers. He is still the brightest young star in the NBA in particular and the sports world in general. He himself also got 3 signature shoes with Nike, especially Kyrie 2, which became Nike’s best-selling basketball shoe in 2016. Will the Nike Kyrie 3 be on par with its brother in terms of performance? No, please read this article by EACHSHOES together.

Both previous Nike Kyrie pairs have the same design of the same material and Kyrie 3 is no exception. The most obvious difference is that Kyrie 3 has returned to the traditional design with the Nike logo on the side instead of using the strap. Belonging to the low-cost shoe line among the signature, Kyrie 3 continues to use fuse and mesh fabric for the shoe body. On some color schemes there is a use of plastic tabs, but they are almost exclusively decorative. Another difference compared to the previous two versions is that the material directly under the toe of the shoe is made of mesh fabric and has 2 Flywire fibers on each side.

The midsole is completely identical to the Kyrie 2 with mostly Phylon and a Zoom pad on the heel (you can see the Zoom piece clearly through the inner plastic under the sole). Nike continues to use the rounded sole design, but doesn’t advertise as it did in the previous version. The sole pattern is also somewhat different with a very large zig zag pattern with 2 separate areas on the sides of the toe pad.

See more:  Top 5 Best KAWS versions any "player" would want to own

As expected, the Kyrie 3 adheres extremely well to any surface thanks to the two tabs on the toes, almost like Nike creates two separate blade traction areas. These two tabs are also protruding from the sole surface, making them more in contact with the floor. The only minus point is that the area around the two tabs does not grip as much as the other areas, something that Kyrie 2 does better.

This base is also not recommended for outdoor play, especially on cement grounds.

Kyrie 3 fit the right size, unless your friends’ feet are too much, do not buy too much to get the hug you want. One thing I find strange is that many of you like to buy shoes that add half or more one size and ask others to do the same. In most cases, buy your correct size based on the size conversion table (for example, go to size 44, EACHSHOES will post this board as soon as possible) and buy up or down half the size. depending on the case. I heard a friend who insisted that these shoes had to be over-sized, but only then did she say that because she wore thick Nike Elite socks she had to buy half the size.

Kyrie 3 hugged better than Kyrie 1 due to the more hugging shoe collar, but still not as much as Kyrie 2 after using the cross straps. However, Kyrie 3 does not feel redundant and embraces very firmly thanks to the asymmetric wiring system. The nose is also more comfortable due to the mesh fabric area which makes tiptoeing movements much smoother, especially when the shoe is new.

See more:  The adidas Yeezy color scheme list will be released in Q3 and 4 of 2019

Continuing with Kyrie 2’s “yes and no” set-up, don’t expect any damping. If soft and smooth is your thing or if your knees tend to be sore after playing soccer, then Nike Kyrie is not for you. Not only that, the pads are also thinned and Nike does not use more Poron for the toe area like Kyrie 2 anymore. Of course the Phylon layer will soften after a while but if you have pain before then you won’t get much better. If you don’t like Kyrie 2’s cushion you won’t like Kyrie 3’s mattress.

The Zoom Bag is very close, but very far away

The strong point of Kyrie 3 is still its extremely high responsiveness to speed and “zero” delay in motion. The rounded design of the sole remains the same, resulting in smoother movement of the shoe.

The base set of Kyrie 3 is almost similar to Kyrie 2 with its wide version, rounded corners and hard foam to help keep your feet secure. While the soft shoe collar doesn’t bring any stiffness, the Kyrie 3’s perfect grip makes up for it. Most recent shoes don’t use a stiff neck design anymore to increase flexibility and focus on other details.

Other protective details such as the heat-pressed toe and the sole that embraces both sides of the toe are also fully designed by Nike. Similar to the Kyrie 2, this is a very sturdy shoe with the simplest possible materials.

Kyrie 3 is a very hugging shoe, very attached to the minimalist cushioning system for defenders who break through and change direction. Both shoes are designed to help you not miss a second on the field, but the cost is low smoothness and poor damping. However, wearing a minimalist shoe like the Kyrie 3 can also gradually help you improve your joints if used properly.

See more:  Chilling over the "zombie" version of The Walking Dead x Puma

Compared with its predecessor, the Kyrie 3 does not have any improvements, but is only designed differently. Nike’s next direction could be to find a way to add more toe pads or think of a more spaced set of the Kyrie 2. Kyrie 3 is currently on sale for $ 120.