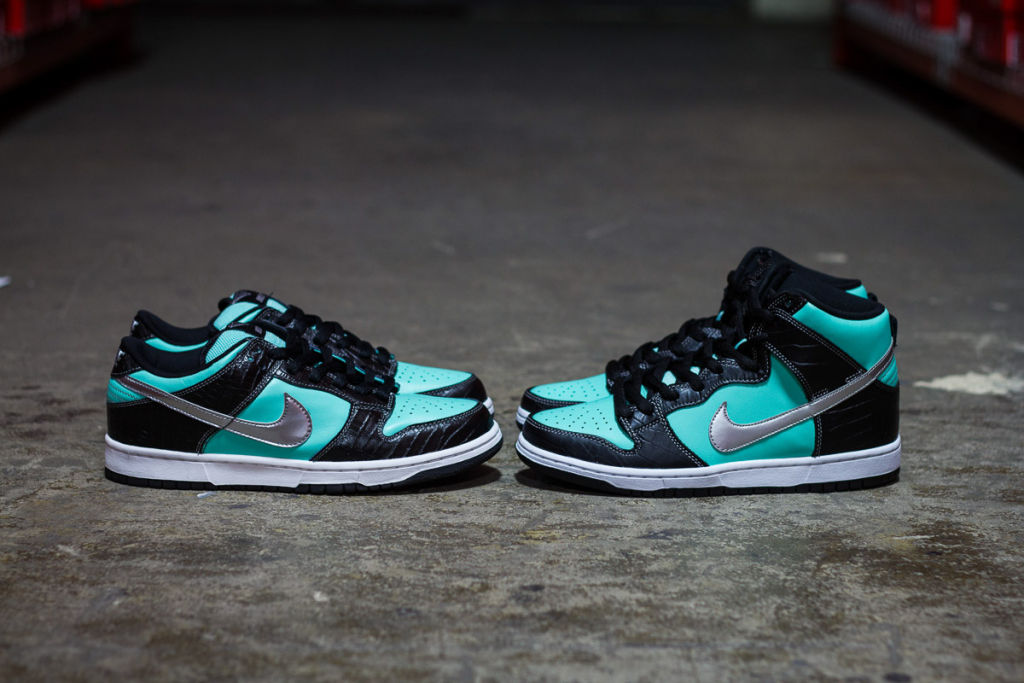 Surely the longtime sneakerhead will never forget the August 2005 when Nike Skateboarding say the same Nick Tershay (Nick Diamond) – the founder of the brand Diamond Supply Co. to create a special sneakers for skateboarding enthusiasts. And the famous Nike SB Dunk’s edition Nike is the main character who takes on the responsibility of wearing the inspiration from Nick Diamond’s talent. And then, perhaps both Nike and Nick could not foresee the heat and timeless influence of the version. Nike SB Dunk Tiffany when it became one of the most welcomed and sought-after sneakers of the time.

Following the success of the first, again, Nike and Diamond Supply Co. continues to revive the Tiffany color scheme on the Nike SB Dunk High version in 2014. Unexpectedly, the heat of the Dunk High Tiffany version has caused the value of the shoe to increase from 5 to 7 times compared to the one. price $ 108 USD. This is indeed one of the most successful collaborations of The Swoosh with a fashion brand dedicated to skateboarding.

A lot of questions appear, but it doesn’t take long to come up with answers to each question. And today, after hours of searching, google keywords related to this color scheme such as “The Origin of Tiffany Colorway”, “Robin’s Egg Blue” or “History of Tiffany Blue”, EACHSHOES would like to share the information. This is because ……. knowledge is boundless.

The color Tiffany blue is partly derived from the egg of a red-necked bird, also known as the stork bird. Indeed, the editors of EACHSHOES were very surprised that such a black bird could lay such a green egg. That is enough to see the specialness of this color scheme.

The green color from the eggs of the Red-necked bird was provided by Jewelry – Diamond Company Tiffany & Co. Over 200 years old, blending Blue to create a special color scheme and copyrighted as TIFFANY. The name of this color scheme first appeared in 1837 in the book of Trademark – BLUE BOOK and became a legend. And in 1853, TIFFANY color became a characteristic color of each box containing its diamond jewelry products.

Through the origin story of TIFFANY color scheme, indeed, the sneakers community, as well as the designers and shoe firms, has used it wonderfully. A legend creates a legend. It is no different than true people who find missionary disciples.

That is why, knowledge is boundless. EACHSHOES is happy to share with you every day a little more knowledge, filter information to make this community better and better.