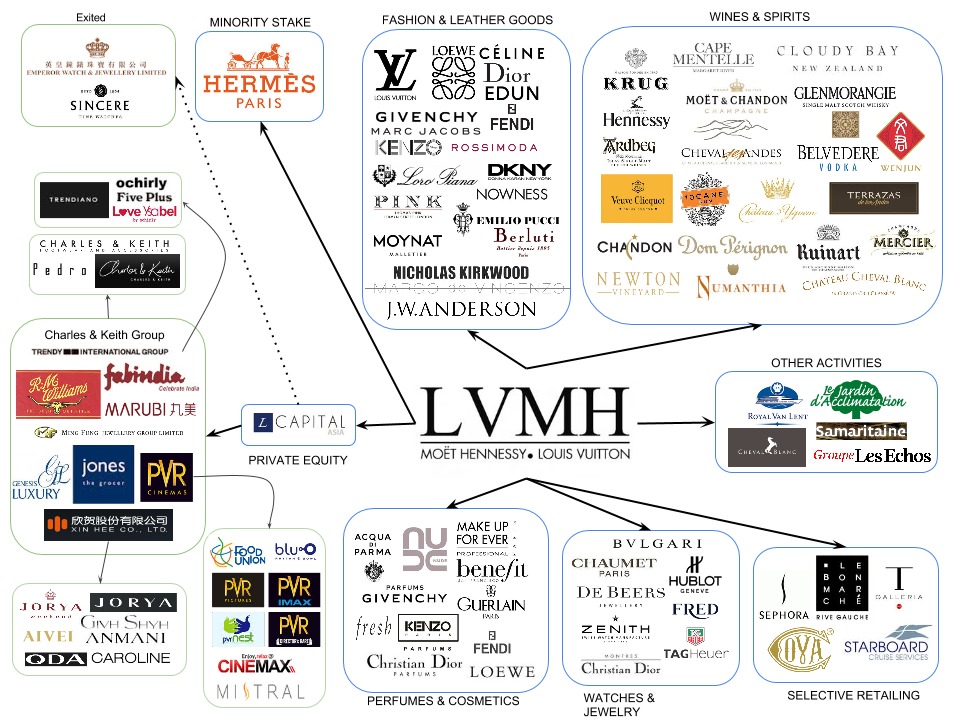 Let’s find out: What brands does LVMH own?

What is LVMH company – What does LVMH mean

What Kind of company is LVMH?

LVMH’s development is associated with the boldness and assertiveness of Bernard Arnault.

This businessman was described by his competitors as “terrifyingly assertive”.

See more:  PUMA and the legendary story of SUEDE

An important part of the group’s strategy is the acquisitions and mergers of cult luxury brands. This article will introduce famous fashion brands owned by LVMH, “what brands does LVMH own” to help readers visualize part of this giant’s magnificence.

What Fashion Luxury Brands Does LVMH Own?

Some outstanding brands with time are owned by LVMH:

Does LVMH own Louis Vuitton?

1987: Louis Vuitton – Founded in 1854, Louis Vuitton became part of LVMH in 1987 when the conglomerate was founded. Moët et Chandon and Hennessy, the world’s leading winery, merged with Louis Vuitton to create LVMH, marking the beginning of an empire.

Who is Kenzo owned by?

Who is Guerlain owned by?

1994: Guerlain – The famous French brand of cosmetics, perfumes and skin care, is one of the oldest in the world. Guerlain was founded in 1828 by the Guerlain family and acquired by LVMH in 1994.

1997: Marc Jacobs – LVMH started to own a majority stake in Marc Jacobs in 1997. It is interesting to note that founder Marc Jacobs approved the deal to become Louis Vuitton’s Creative Director, working in the position. this from 1997 to 2013.

Who is Sephora owned by?

1997: Sephora – This is not a fashion brand, but a famous chain of cosmetic stores, founded in 1969 in France. Acquired by LVMH in 1997, Sephora gradually expands its operations around the world.

Does LVMH own Tag Heuer?

Does LVMH own Fendi?

Does LVMH own Hermes?

Who is the Bvlgari (Bulgari) owner?

Is LVMH a Christian Dior owner?

2017: Christian Dior – The biggest deal in LVMH’s history of merger and acquisition took place in 2017 when it acquired Christian Dior for $ 13.1 billion.

Synthesized from The Fashion Law and some other information sources

Source: What brands does LVMH own? – Eachshoes.com