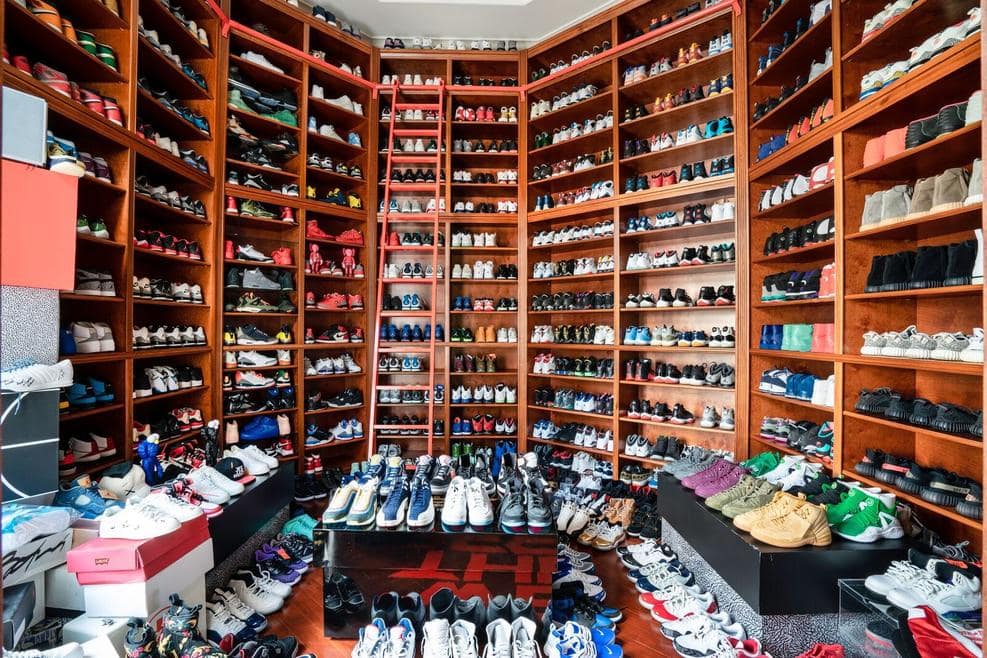 As a sneakerhead, you definitely want to own a huge collection of shoes. However, there are people who spend their youth to collect sneakers. Who are they?

With a growing passion for sneakers among young people, owning yourself hot shoes is no stranger. Since then, owning a huge collection of sneakers is no longer too difficult. Many young people have for themselves a dozen, twenty or even a hundred different pairs of shoes. However, there are so many guys who own such a huge collection of shoes that some of them have designs that cannot even be found on Google or those that cost hundreds of millions.

They can be celebs, who always appear in public with a new look, and always come with a pair of really new shoes, really “dashing”. Or sometimes they are just ordinary people but have an infinite passion and love for sneakers. Thereby spending a lot of time, effort and money on shoes. Therefore, whoever they are, their efforts and “achievements” are worthy of admiration, right. In this article, let’s take a look at some “DAI GIA” with the collection of sneakers of the world’s MOST MOSTABLE.

Known for its top-notch music products and popular with fans, DJ Khaled is also impressed by his super sneaker collection. Khaled collects shoes so much that Jordan Brand shook hands with this rapper many times to come out with a collab called “We Are The Best” and released in very small numbers (friends and families). DJ Khaled’s collection is dominated by Air Jordan Retro color schemes, including rare color schemes such as the Air Jordan 4 Eminem Carhartt, Pinnacle versions, and especially SE, PE pairs exclusively for the American universities that ordinary people would almost never buy.

DJ Khaled’s collection is so great that he has to store it in a large room with a series of wooden shelves and stairs to retrieve them.

If you love basketball and have an NBA track, you cannot help but know PJ Tucker, a striker playing for the Houston Rocket team alongside “Beard God” James Harden and Point God Chris Paul. In terms of achievements and playability, PJ Tucker is not so excellent, but what makes him always attract the attention of so many pairs of eyes is his terrible sneakers collection. With each match, he will wear a different pair of shoes, and not the same time. Of course, these are also valuable, rare and sought-after sneakers. He even brought some products that were not used for professional competition on the field such as Nike Air Fear of God, Supreme x Air Jordan 5, Air Jordan 3, Air Jordan 4 … In his dressing room there were even close to 20 pairs of sneakers, making it extremely difficult to choose a shoe model to play on.

Like DJ Khaled, Chris Brown’s shoe collection was interviewed by Complex magazine of the United States, and the American multi-talented singer had to dedicate an entire room to it. Not as orderly as Khaled, Brown often placed his shoes on low racks, and left them on the floor for easy selection. He also does not completely focus on hot or rare sneakers, but owns many different products, including Vans, Converse, Nike Air Force 1, adidas Super Star … Especially he shows his love. for Vans products.

Our final agent is a completely normal character – Blake Linder. He is a famous YouTuber with Vlog react review and discussion about sneakers. Blake Linder lives in California, only 20 years old this year but owns an extremely hypebeast and luxury collection, worth about $ 1,000,000. He is not a reseller and does not camp a pair of hypebeast shoes. But why could Blake have the best hype out there? The simplest answer is because the Blakes are extremely rich. Once in the video, he said his shoes were bought by his father.

And you see, Linder simply sits at home, picks up shoes and buys it with a credit card from dad, or mom or somebody. However, it is fair to say that Blake is handsome and charming, making his videos on Youtube gain the love of many young people.

Source: Check out the “Giants” with the world’s MOST MASSIVE sneaker collection
– Eachshoes.com