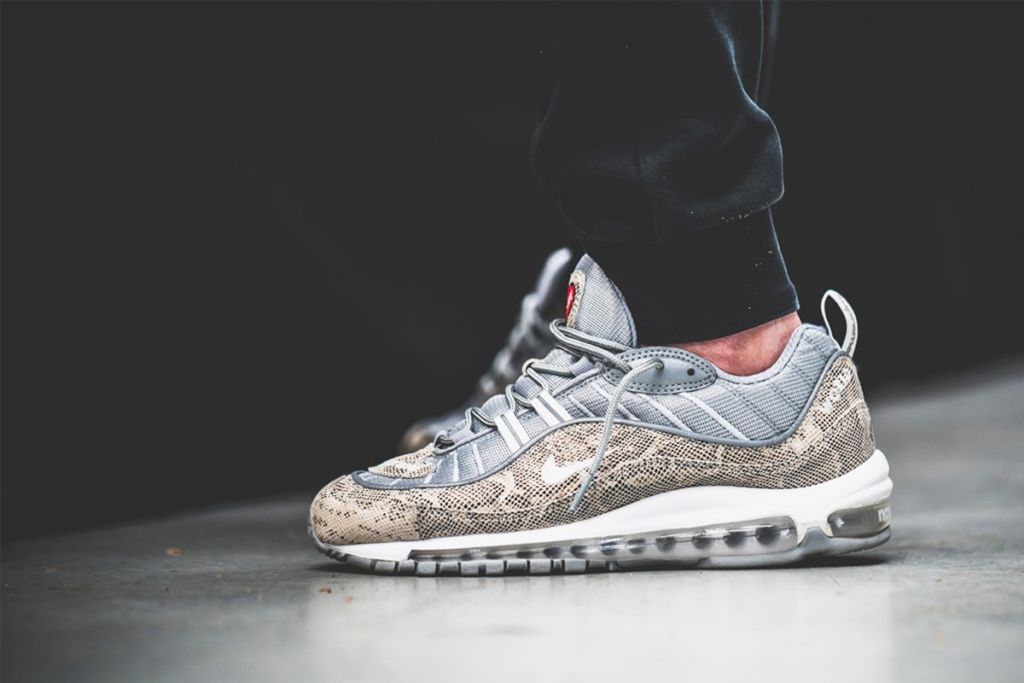 Over the past 20 years, Supreme – the major fashion brand from New York has had a lot of collabs with countless big names, from clothing, technology, sportswear, and toys brands. even the giants in the furniture industry. When it comes to sneaker, however, Supreme seems quite loyal to Vans, Timberland and of course Nike. It can be said that the swoosh and Supreme have had quite a few successful products, and most recently saw the launch of Supreme x Nike More Uptempo.

So in this post, let EACHSHOES look back at 15 years of collaboration of two extremely big names in the current fashion industry to review the collab versions between Nike and Supreme.

Nike Dunk Low Pro SB Supreme was released around spring 2002 in extremely limited quantities. It must be said that the Nike SB Dunk line itself was a hit with the sneakerhead community at that time. And until the shoe has the collaboration of a prestigious Supreme brand, it really drives people crazy.

For his first collab with Nike, Supreme wanted to show the love of New York surfers to Jordan products, so he put the Elephant print on the SB Dunk pair. Although not published online, but information about the shoes is still spread by word of mouth. As a result, on the day of its launch, at all 4 Supreme retail stores, a very long line of people lined up from 9am to 12pm just to get the shoes on.

This is the game changer of both Supreme and Nike SB. While Supreme reaches a wider audience, not just skaters, Nike proves its dominance in the sneaker industry and shows that two seemingly unrelated names are completely unrelated. can combine well with each other.

After the huge success in 2002, it is clear that the next version will be very difficult because it receives careful attention from the community, and of course both Nike and Supreme do not want to fail. As for Supreme, the company still wants to exploit more SB Dunk line and plans to continue to take this design as the main character. And Supreme saw potential when it discovered the campaign “Be True To Your School” launched by Nike in 1985, with three color schemes of SB Dunk including “University Blue,” “College Orange” and “Varsity Red.”

After a few failed trials, Nike and Supreme finally came to a consensus when launching an SB Dunk High version, with swoosh marks running down the sides of the shoe, tiny star logos in the middle of the upper, imitation crocodile leather details, 3 color options for shoelaces and an indispensable Supreme tag in luxury gold.

After destroying with two SB Dunk products, Nike wanted to promote and bring the Delta Force product line (another sneaker version of the 80s) to fans by partnering with Supreme. This time, however, Nike failed.

The shoes possess a light color combination, not too distinctive, the thick upper part and the gum face, and are very suitable for becoming a skateboard shoe. However, this collab does not have any prominent Supreme logo, plus a chubby and gentle design, the shoe is not a sneaker version that is too difficult to buy at Supreme retail stores.

After the failure of Nike Delta Force 3/4 SB Supreme, Supreme decided to regain the spotlight when deciding to choose Blazer SB as the next product. Having a relatively long history with both skater and basketball athletes, the Nike Blazer seems like a promising item. More specifically, Supreme decided to bring a very classy design with an all-leather upper, swoosh with snake-skin pattern, gold-plated shoelaces, a gold “Supreme” tag on the back, and a heel design shoes are very similar to Gucci’s. The quality and premiumness of the version really took the Nike Blazer to a whole new level, and of course the shoes became a hit as soon as they hit the shelves.

For a 2007 collab, Supreme wore a sneaker that seemed to have fallen into oblivion: the Nike Air Trainer 2 returns and once again, taking the above details used on the Air Jordan versions onto the design, this time. The design of the upper side on the Air Jordan 4 in 1989.

Designing quite similar to Blazer SB, the Nike Bruin 1972 was originally a basketball shoe version, but later favored by skater in Northern California.

The Bruin is a really simple shoe, so Supreme brought modern New York designs to the shoe, with a suede upper, metallic swoosh accents and the slogo “World Famous” along the heeltab.

For the Fall Winter 2010 collection, Supreme with the desire to make a mark has released a sneaker version designed by Supreme and engineered by Nike. The Supreme Nike SB 94 features past and future touches with a design style of classic surfboard shoes paired with premium Foamposite materials and trendy Zoom Air cushioning. The shoes are released in 4 color schemes: Black, Green, Red and Navy.

The sneaker designed for tennis is joined by Supreme and Fragment Design on the shelves with 3 simple color combinations: black, white and red with the logo of 2 fashion brands in tiny print running along the fabric upper. Simple canvas. Despite the leaked photos in 2011, it seems that the shoes were never officially introduced to the user.

Receiving some feedback from the previous Nike SB Supreme 94, the two brands continued to have a few small changes re-releasing the shoes in 2011. With the lighter, quieter heel and nose Sturdy shoes, more suitable for skaters.

On the 10th anniversary of the union of Nike and Supreme, the two giants decided to bring back one of the most anticipated SB Dunk color schemes of all time – Nike SB Dunk Low Pro.

The 2012 version has a few changes with a red upper instead of white as before, the Supreme logo on the pads and of course the featured Elephant Print motifs. Although not much has changed or improved, however Nike and Supreme gave their fans what they wanted, and most importantly, the shoes were sold out immediately when they first appeared on the shelves.