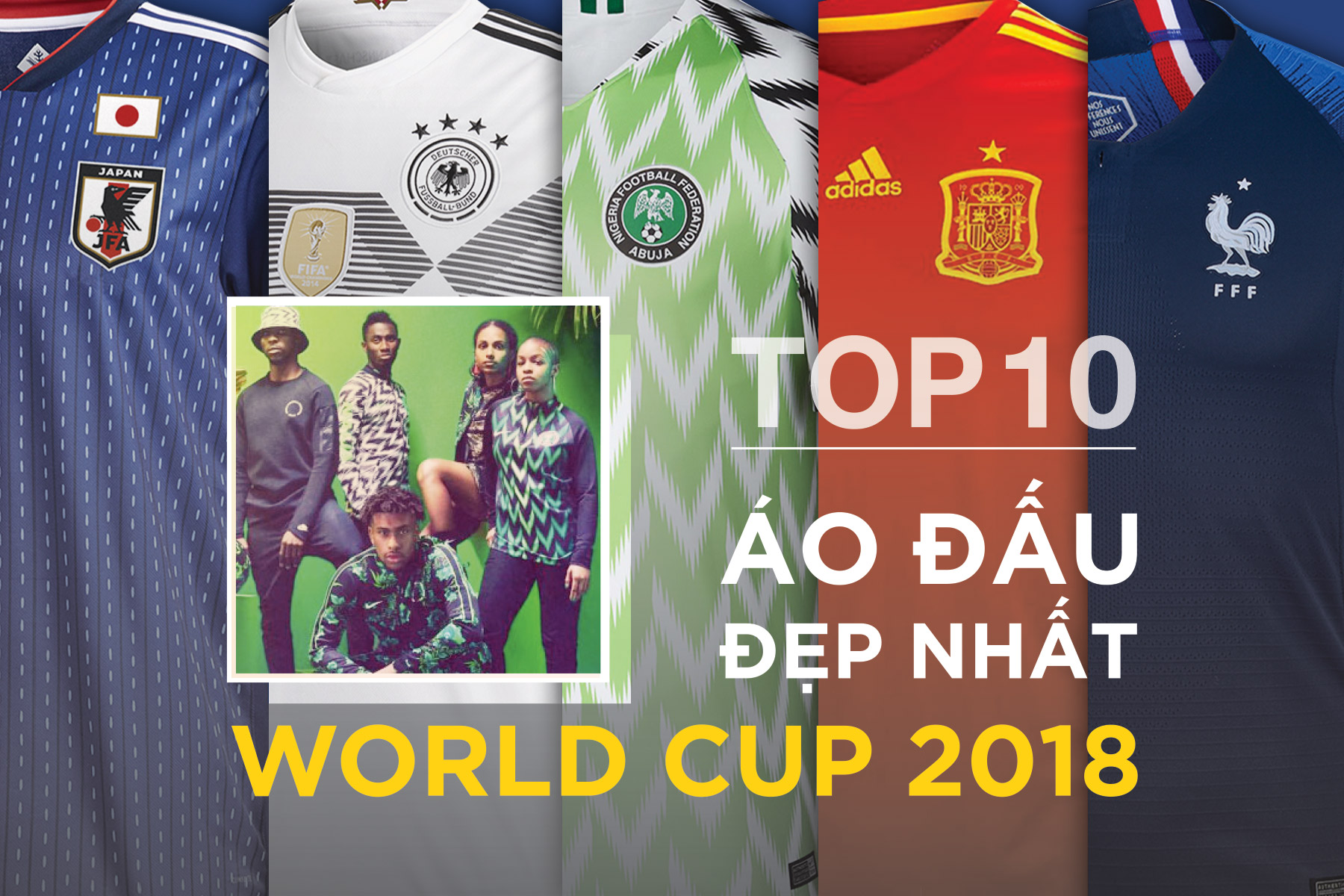 Only one day left is the biggest tournament on the planet World Cup 2018 will open. On June 14, 2018, 32 teams will officially enter a fierce class war. A series of football lovers from all over the world gathered to Russia – the country that was honored to host this year’s competition. Bringing in him infinite national pride. Fans from many cultures come together to stand under one roof for their love of the ball.

Before the jubilant atmosphere of the event, the firms competed to launch special collections for this occasion. In addition to the noisy gossip surrounding the happy sneakers World Cup. The jerseys that the teams will wear is also the subject of controversy among the online community. And EACHSHOES Score through the 10 most beautiful jerseys of the participating countries World Cup this year.

Topping the list is definitely indispensable Nigeria. The shirt makes fans crazy and can buy it. Although has been out since February, but with preorder count over 3 million. Products are still sold out in less than half an hour in stores Nike. This cult shirt is called “Naija”, nicknamed for “new Nigeria”.

Naija possesses zigzag pattern with three colors white, black, blue all over the shirt. With the image of eagle wings spreading their wings like the Nigerian National team – “Super Eagles”. A shirt World Cup This also celebrates 24 years since 1994 when Nigeria first entered this international competition.

Next is the product from the Argentina team. As a tradition, the blue striped shirt has always been the logo of this team. With the pattern worn since 1908, you don’t think it makes any difference. But in fact, the color is somewhat lighter and looks like a sky full of hope. Old but classy, ​​why change it to something else?

Combined with the old design, the 2018 shirt is remade based on one of Germany’s most beloved models in 1990. Instead of the national flag color right on the three horizontal bars on the chest like in the 90’s. adidas has been more subtle when applying only the black / gray color scheme on the version World Cup 2018. In addition, the logo for the World Cup winner is placed in the center of the shirt. Confirming his position as well as the team’s high aspirations with the 2018 championship is so intense. Will history repeat this year?

Black blue combined with royal blue and the wave detail along the sleeves is a special feature of the French team shirt. The classic shirt with the words “Liberte, Egalite, Fraternite” right on the button of the collar is the motto of this country. While the words inside are “Nos Differences Nous Unissent” (our differences unite us). The implication is that “Difference makes us”. Let’s see how different France will be this year.

Portugal’s version of this shirt also follows the retro trends of other teams when it comes to this tournament in Russia. However, the European Championship champion two years ago did not make much of a breakthrough in his design. In addition to a few details in gold color reminiscent of the 2016 championship in France. EACHSHOES See nothing else new. However, what style of shirt Ronaldo wears is beautiful, right?

The Japanese jerseys color is inspired by the team’s nickname, Samurai Blue. The round dots have the same image as the armor of ancient samurai. A pride of Japanese culture and spirit. Meaningful but not less fashionable, right?

Famous for clothes that only revolve around red, yellow and blue. Spain’s kit is still focused on these colors this year. But the interesting thing about the combination of red and blue turns purple. According to The Associated Press, purple is the flag color of The Second Spanish Republic. A group of people still use this flag color because they oppose the current monarchy. However, adidas has asserted that “there are no political implications in the shirt”. This is just a remake of the Spanish team shirt in 1994. It’s easy, guys.

Many netizens believe this shirt is a step backward for adidas. They look like the sweater of a grandfather with the pattern between the chest of the 90s. Particularly EACHSHOES found that this product stood out. Taking the inspiration from the 1984 European Championship jersey of Belgium. And this team has successfully escaped the bad mouth motif of 2014. An admirable attempt to get rid of the old is not it?

If you look closely at the Senegal team’s shirt, you will immediately see the familiar lion’s head. Strong image represents this national team with the nickname “the Lions of Teranga”. Hidden on a white background reappeared the silhouette of a lion. Isn’t this the implication of PUMA When designing shirts for the Senegal National Team? Each of them has a part of the forest lord’s wild personality inside. Just wait for the right moment and show your strength.

See more:  Top of the most beautiful black sneakers of Nike today

The Top 10’s Ending EACHSHOES is a shirt from Croatia. There is no dispute with the checkerboard detail on the front of the shirt. Many commented that if Croatia didn’t have this detail, they would claim all the money right away. Red / white squares of a larger size than usual with slightly wavy edges. This created a very cool breeze with the old formats of this country.

Which team do you see with the best jersey? Please let EACHSHOES know your opinion.