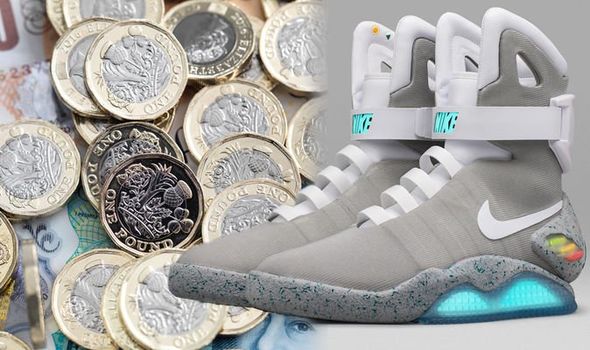 Let’s find out: The TOP 10 most expensive sneakers of all time come with historic landmarks

Sneakers have been and are forming one of the most interesting terrestrial cultures today because of diversity, stories from brands, from individual athletes associated with products, even going into movies and create memorable historical landmarks. EACHSHOES would like to re-edit Highsnobiety’s post so that you can easily follow the TOP 10 shoes with the highest selling price up to now.

You will be surprised that Nike is on the list of 9 out of 10 pairs and a special pair of Converse and now it belongs to Nike. Indeed, Nike has created the oldest campaigns, Collaboration (combined) versions as well as historical stories that have created a huge turning point in the world of shoes games around the world.

The shoes were successfully purchased by Canadian shoe collector Miles Nadal. This is one of the most expensive sneakers in history to date. Only 12 pairs of “Moon Shoe” sneakers are made worldwide and these are 12 sneakers that have never been worn (DS – Dead-stock). A pair of Moon Shoe was sold on Ebay in 2016 for $ 11,200. It is really amazing.

See more:  When Sneakers and Dota are passionate, they become one

Maybe many of you only know Michael Jordan is the brand representative of Jordan Brand under Nike. However, Michael Jordan used the Converse Fastbreaks in his matches with the University of North Carolina team. These special shoes were used during the 1984 Olympic event and won the Championship, the Gold Medal upon winning the Spain Team. The shoe went on sale in 2017 in a private auction when it featured Michael Jordan’s signature and historical stories over 30 years ago.

The Converse brand tried to own this special shoe even though the price was very high to be able to own it. These are very valuable and historic shoes, and Converse is also concerned about keeping the shoes safe, quoted from Converse’s Head of Product Storage Project, Sam Smallidge (Nguyen). Văn: For me, the shoe is super interesting to look at, but then I think I’d have a heart attack worrying about keeping it safe ”)

Flu-game shoes should not be said, because EACHSHOES has actually written a very long article about it before. To recap some of the most important and historical things about Michael Jordan you can read HERE.

Although the original Nike Air Mag version of Marty McFly’s “Back to the Future II” movie didn’t automatically tie the laces. But in October 2016, Nike released 89 pairs of fully functional Air Mags via a raffle. Each ticket is worth about $ 10 and grossed more than $ 6.75 million going to the Michael J. Fox Foundation at the end of the show. Just two months after the shoe was released, at an auction in Hong Kong, it sold for $ 104,000.

While the 2016 version was fully functionalized as in the movie, the shoes of 1989 were still warmly welcomed by many. Even though the sole was damaged, the model sold for nearly $ 100,000. This high price is probably largely because these are the only shoes made specifically for the movie by Nike. There are rumors that this version was worn by Michael J. Fox while filming the movie. But there is also some information confirming that this is just a couple in the collection of a longtime Nike employee.

After Stephen Curry made the online community stir over his argument that the 1959 moon expedition was fake, a few weeks later, the basketball star appeared on the field with a pair of custom Under Armor 6. The shoes are custom made with a moon surface image. It looks quite similar to the “Moon Landing” version of the Nike Air Max ever released. Stephen Curry then corrected his previous statements about the moon as a joke and he sold his signature custom shoes on eBay. All the proceeds are sent to science education funds.

Eminem has collaborated with Nike several times during his singing career. And of course those versions are in the Top of the most expensive sneakers ever. But there has never been a version of this rapper that combines the three brands above. The version you see was released in extremely limited quantities to celebrate the 15th anniversary of Shady Records. And all profits, about $ 227,000, go to the Marshal Mathers Foundation.

See more:  Why are windbreakers so expensive? - The history of "windbreaker"

There’s certainly no arguing the heat of DJ Khaled as a sneakerheads. In 2017, Nike teamed up with him on the “Grateful” Air Jordan 3 edition. The shoe features a unique cement motif on the shoe and the Jumpman “WE THE BEST” hangtag. This captivating crimson version has made countless sneakerheads in the world go crazy about it.

In 2017, Nike announced that Tinker Hatfield would design an Air Jordan V version exclusively for the University of Michigan. The school’s basketball team, also known as the Fab Five, was one of the popular high school basketball teams of the time. So this is completely understandable when their own markings are depicted on a legendary version of the shoe. The shoes possess a brilliant yellow color scheme, which is also the main color of the team. And importantly it’s just a team version, Friends & Family version. However, we still see a couple of pairs being sold on the resell market at such high prices.

In 2005, sneakers retailer UNDEFEATED in LA teamed up with Nike and Jordan Brand to launch a stylish 4-piece Air Jordan. These shoes have always been in the Top most expensive shoe versions ever. Strong and masculine boots with military-style khaki blue. And it’s limited to 72 pairs worldwide. Therefore, it is not surprising that these shoes are still priced so high.