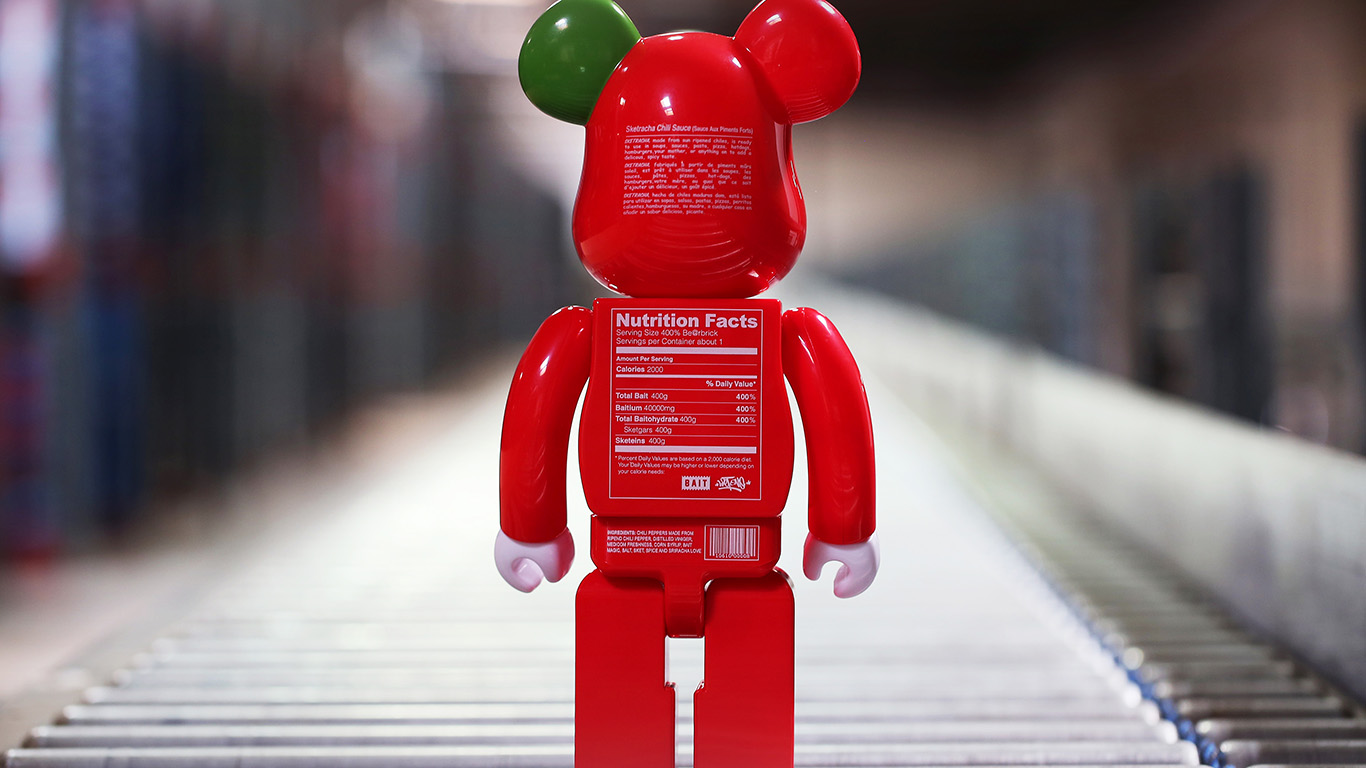 For those who not only have a passion for each streetwear but also the things that revolve around them, the Bearbrick bears from Medicom Toy are definitely one of the things you need to own. For people born in the 80s and 90s, toys from this brand are the answer when asked what are adult toys. The biggest difference of these Bearbricks from other toys comes from the artistic perspective these bulky bears bring.

Bearbrick comes in three versions: 100%, 400% and 1000%. In particular, the 1000% version is highly sought after by collectors for exclusive and difficult to own models such as Dover Street Market, Colette, KAWS, Chanel or Nike. So what are the most rare and highest priced 1000% Bearbrick versions available today? Let’s take a look!

This bear is born from the combination of the artwork “Chompers” of KAWS and the Japanese music festival a-nation. For those who do not know, a-nation is a series of summer music events in Japan each year in August. Combining KAWS details such as X-shaped eyes and “Chompers” teeth, with sharp green of a-nation, this bear is released only in Japan and Bearbrick’s online store.

As a collaboration version between COMME des GARCONS and Dover Street Market, this Bearbrick is completely transparent, released for the holiday time of 2006. This version comes in 1000% and 400% templates. At release, this bear was priced at $ 195 USD and quickly rose to $ 2,980 USD in a short span of time.

Colette is one of the names that has supported, sold and collaborated with the Medicom Toy on the Bearbrick model for many years. One of their famous Bearbrick bears is definitely the 10th anniversary edition of the store. Although only in white color, this version stands out with signature details from major artists including KAWS, André, Devilrobots, Brian Damage, Pete Fowler, Futura, James Jarvis, Michael Lau, Stash, Will Sweeney. and Kuntzel + Deygas. This Bearbrick model was only released in 100 units, causing the price of resell to skyrocket.

As a version that pays respect to interior and material designer – Alexander Girard, this Bearbrick version is only released at the Stitch store, Japan. Wearing a red color, this bear is also decorated with a heart assembled from the word “love” in 16 different languages, taken from Girard’s “International Love Heart” design during the time of making. work at Herman Miller.

Medicom Toy has twice collaborated with Japanese furniture company Karimoku to produce handmade wooden bearbrick models. In this case, the bear in their first collaboration is made from pine wood and handcrafted by Japanese artisans.