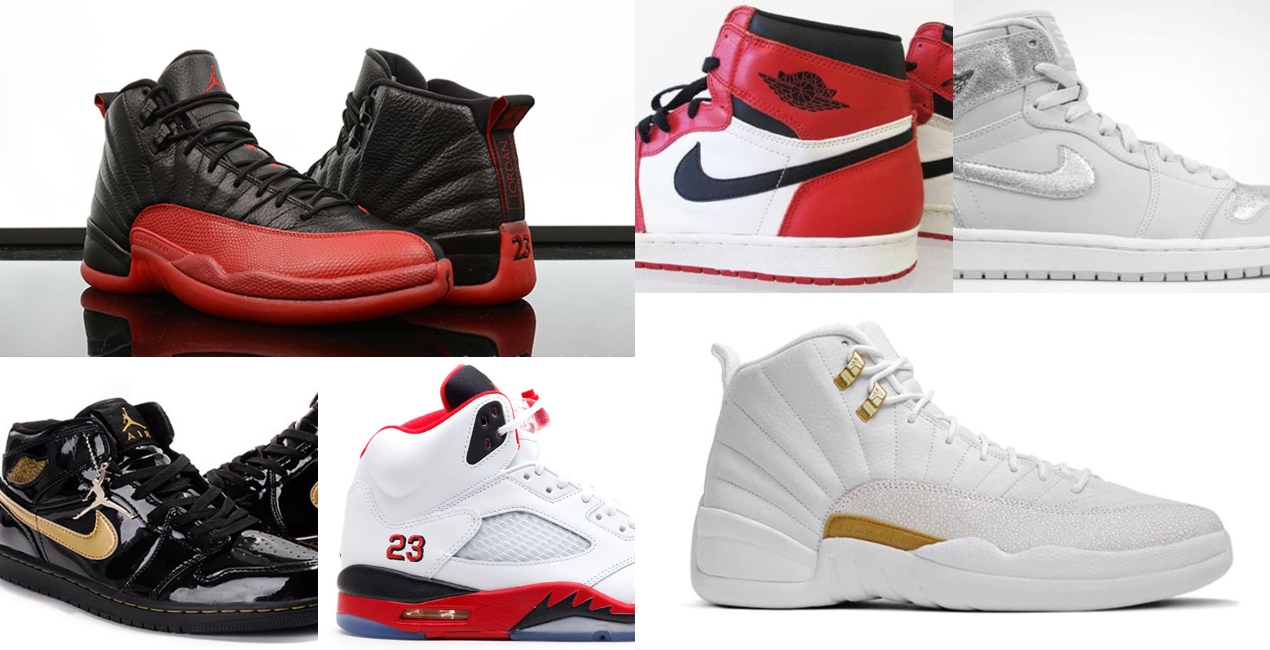 There is certainly no doubt that the world’s best-selling sneakers are the Air Jordan. Not only that, but this brand is also the birthplace of many expensive sneakers in the world of sneakers. Although it doesn’t come cheap for a pair of Air Jordans, they are popular among fans and non-fans of basketball legend Michael Jordan. This brand gradually becomes a monument that any sneakerheads craves to own.

The Air Jordan is more than just a regular sneakers. It is not only a fashion icon but also possesses spiritual values ​​that almost no other brand can compare. Any sneakerheads must admit, the cost of one pair of Air Jordans is always more expensive than other versions of the shoe. It is not uncommon for Air Jordans to have old pairs that are worth hundreds of thousands of dollars.

Air Jordans were introduced by Nike in 1985. At that time, Nike hardly expected it to change the way people play basketball with its new line of shoes. Even the fact that they deeply affect even people who do not play basketball is extremely surprising. Everyone suddenly wanted something like Michael Jordan, flying through the air and reaching the height of that basket. And wearing an Air jordans is the closest and simplest way they can do it.

So what makes the Air Jordans so special? For many, it is simply a pair of sneakers everyone wears, a worldwide trend. However, for those who truly love the brand, they are a legacy of generations of basketball. With “Jordanheads”, each shoe has stories to tell in the back. The memorable and meaningful moments they bring to the young generation. Each pair conveys something special from the lifestyle of basketball legends. Fans loved the individuals that were attached to Michael Jordans’ shoes.

Temporarily translated: “I just want to thank everyone for buying the same shoes over and over again”.

Michael Jordans himself is also an inspirational figure for the line of shoes he represents and for younger generations. The shoes MJ created clearly reflect his values ​​and love for the sport. Maybe that’s why even though he stopped playing sports, MJ’s life is still an inspiration to many people. And the Air Jordans line, although launched in 1985, but up to now, they are still a symbol of young people and many people love. Furthermore, AJ is not simply a pair of shoes that you wear and can easily be replaced with another pair. Many people choose to collect this shoe line. Take care of and preserve them as much as possible other collectors.

The love and desire to own Air Jordans versions of sneakerheads has never cooled. The Air Jordans are still more popular than ever. And young people as well as basketball fans will always follow them every time a certain version is released. Evidence is that many people have estimated that MJ earned more than $ 110 million in 2017 from this shoe line. And today, EACHSHOES will introduce to you the Top 10 most expensive Air Jordans ever sold this year. EACHSHOES will distinguish between price, design and what makes them so expensive. Scroll down now and see!

Released in 1990, the Air Jordan V was the fifth sneakers to bear the Michael Jordans signature. The shoes were researched and created by Tinker Hatfield himself. The shoes originally had the word “Nike Air” printed on the heel but later replaced with the Jumpman logo in subsequent releases from 2014. Air Jordan V, though at the cheapest price. in the list of EACHSHOES. However, they are still sold for as low as $ 10,000.

The next version was released in 2002, around the time Jordan was playing for the Washington Wizards. The shoe is like a milestone marking the return of this legend in the NBA tournament after a brief break. The sneakers clearly reflect the sophistication and simplicity of the brand itself. The shoes have a movable section and cover most of the upper. In addition, this version is also housed in a rather special metal shoe box. The detail that makes the shoes add value and is extremely fashionable for those who buy them.

The next version that EACHSHOES introduces to you is the Air Jordan 10 OVO pair. The rare and expensive sneakers were originally made for rapper Drake and his teammates as a gift. The shoes also show the close cooperation between Jordan Brand and this rapper. A fan was fortunate to own these shoes during the “Drake Night” event in Toronto. Quickly, this fan immediately sold these shoes and made a small sum of money, up to $ 20,000. All black combinations of these shoes are stamped with a red Jumpman logo accompanied by an OVO golden owl on the upper.

Another masterpiece from renowned designer Tinker Hatfield, the Air Jordan XI is the first sneakers to use Nike’s leather and carbon design. The shoes are perfectly covered by leather and are quite versatile for you to wear in many different occasions. Whether going to basketball or in everyday activities, these sneakers are good for your feet. It was also one of the most sought-after basketball shoes, and led to many of the retro versions Nike released later on. Even Michael Jordan used to wear these shoes in the NMD tournament and more specifically, in the animated film Space Jam.

Similar to the Blackout above, this shoe is one of the few versions made of glossy leather. Thanks to this material, the shoe has a pretty glossy appearance. Metallic gold Swoosh marks make them even more impressive and special. This is also the first time this odd color scheme has been applied to sneakers. But that is why this version of the shoe becomes so fancy and attractive. Retail prices are only $ 100, but due to limited quantities they quickly become one of the most expensive Jordan pairs on sale.

The next Air Jordan pair is known as one of the most loved and coveted versions ever made. Fans and sneakerheads are particularly crazy about Chicago Bulls-inspired color schemes. This place brings deep memories of MJ’s famous career later. The Air Jordan 1 is a version that deflects all chronographs. The evidence is the meaning, heritage and the ability to experience that they offer that are what contribute significantly to the popularity of this shoe. Fans have so far gone through two retro versions of it, one in 2013 and the other in 2015. And every comeback drives fans crazy and scrambling to buy the shoes home.

Despite the fact that this version was not popular among basketball and sneakerheads fans, the shoes were unexpectedly sold for $ 31,000 on eBay. The sneakers are made by designer Bruce Kilgore and made in Italy. However, Jordan Brand was unable to produce any more versions of the shoes inspired by the shoe until 2004. Subsequent versions were produced and tested in different color schemes to find the version. best version for the community at that time.

Surely this is not your normal pair of Air Jordan. These shoes are rich in MJ’s history and are of great value to fans and collectors. MJ’s wife gave him these shoes for his 32nd birthday. And this has made it a very valuable memento. The shoes were made of silver and only 10 were released. Most versions are owned by collectors. A special MJ signature edition was auctioned for $ 60,000

These sneakers aren’t your usual Air Jordan. It is rich in MJ’s history and is worth much more for avid fans and collectors. MJ’s wife gave him shoes for her 32nd birthday, making it a worthy memento. Crafted from silver, only 10 were released, most of which are currently owned by collectors. This particular shoe grossed $ 60,000 in an auction due to MJ’s signature on it.

Although this 12 OVO version shares the same style as the rapper Drake pair that was given before, it is not the same as the previous Air Jordan 12 OVO versions. The shoes are predominantly white and are made from Stingray and tumbled leather. Two golden details appear on the side of the shoe and the first two eyelets. The transparent soles even make the mark of OVO. The shoes were rumored by many to be owned by a female fan, but she quickly sold them for up to $ 100,000. Easy money!

And finally, the most expensive shoe to date is the Air Jordan 12 Flu Game. The shoes have a very interesting back story. The Chicago Bulls played with the Utah Jazz in the 1997 NBA Finals with a 2 – 2 streak. In the end, the Utah Jazz went ahead with two goals. On the Chicago Bulls’ problem, MJ has shown signs of having a cold and can’t play at his best. However, Jordan managed to lead his team to the final victory with 15 points in the fourth stage.

The shoes only have two main colors, red and black, full of strength and mystery. In addition, the shoes are also selected from high quality leather materials, so they are also extremely valuable. It can be said that this version is the king of all Air Jordans. It should come as no surprise that this version sells for $ 140,000. When you buy these shoes, you not only own a sneakers version of the Air Jordan, but also the memories and spiritual values ​​within them.

Source: Top 10 most expensive Air Jordan shoes that everyone craves to own – Eachshoes.com