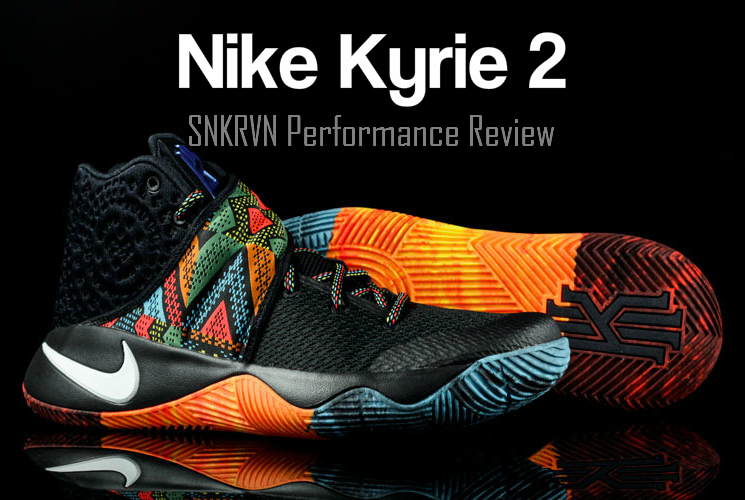 After only a few years in the NBA, Kyrie Irving has shown that he is not only hot at the NCAA but can also do the utopian things in the NBA. He also contributed greatly to the Cleveland Cavaliers championship last year, and his next shoe – the Kyrie 2 also became Nike Basketball’s best-selling shoe.

The following is a somewhat slow review by EACHSHOES about the shoe that ranked 10th in sales for 2016. The color scheme tested in the post is Kyrie 2 Black History Month.

Fuse and mesh fabric continue to be used for the upper but it is a little softer and doesn’t feel as “crunchy” as the Kyrie 1. The biggest change of the material is the presence of the laminated strap and Pasterns are made of soft foam. The area wrapped around the heels and ankles is quite soft and wrapped up completely around the ankle. The advantages of these materials are that they are hard to wrinkle, durable, but at the same time the midfoot area will loosen slightly after a while.

Instead of Zoom in the nose like Kyrie 1, Nike reversed for this version 2. We have a Zoom bag in the heel wrapped in Phylon and a toe with absolutely nothing. Kyrie 2 is also the first Nike shoe with a maximum rounded nose design as well as blade traction soles.

First introduced to Nike basketball shoes, the bar-shaped sole with a design around a central point is Kyrie’s most recognizable feature 2. Thick lines and wide spacing provide Top floor grip for this shoe. If Kobe 9 is 10, then Kyrie 2 will get at least 8.5 to 9 points.

The rubber part on the sole is not too soft, but proves to be quite durable even when used on several cement grounds. Compared to 2016 Hyperdunk, the durability of Kyrie 2 is somewhat better, but be prepared to stick the soles if you want to use these shoes just for outdoor play.

It is difficult to use the word “comfortable” to describe the first time when Kyrie 2 was inserted because the toe of the shoe is really tight and tight. The 2-fit Kyrie is extremely the right size, but due to its hugging design, you may have to buy half a size if your feet are between two different sizes. However, the feeling provided by Kyrie 2 is firmer and tighter than Kyrie 1 thanks to the asymmetrical wiring and a higher neck. “Um” is not an exact word to refer to Kyrie 2, but the shoes also break in lighter and more comfortable than the predecessor.

The slipping of heels is something that any sports player in general or basketball in particular wants to encounter in stressful conditions and Kyrie 2 satisfies us completely in this respect. The cushion around the heel holds the writer’s heel firmly during play while providing a sense of certainty needed. The strap strap is quite effective if you do not want to tighten the ankle too tight, in return, its durability is not too good.

If the heel of the Kyrie 2 is equipped with a Zoom pad and a large amount of Phylon, Nike has minimized the material in the toe to achieve the fastest “redirect” effect possible. Nike has put a thin layer of Poron under the toe (the brown part in the picture) but it’s not worth it either. Backing up the thin, stiff Nike cushioning provides extremely high sensitivity to compensate for smoothness.

The nose of the Kyrie 2 is also advertised with a rounded design that gives you the ability to manage and change directions faster (according to Nike). This design takes some getting used to but also helps you practice using your toes more while running. Like other minimalist toe padding shoes, the Kyrie 2 is not for everyone, especially those who like the bouncing and smooth feel of Boost or Zoom Air.

Without a large heel block on the outside, the wide and sturdy Phylon sole of the Kyrie 2 provides a secure, stable feel to the shoe especially in the heel. Different from the rounded design at the nose, the sole on the heel is quite flat, helping to prevent the flip very well.

In addition, the sturdy Fuse material at the toe of the shoe both hugs the foot while ensuring your feet do not slip off the sole. Kyrie 2 is also an example of very efficient use of materials.

Nike Kyrie 2 is a very special shoe, especially in that it has almost no technology but is extremely popular, without the need of Zoom Air or Lunarlon and still the best selling basketball shoe only. after Jordan. The Nike Kyrie 2 is a shoe for defenders that specialize in speed on the field and not so important to the comfort of the sole. Except for a slightly sparse texture, Kyrie 2 is also a good choice for outdoor courts. Currently you can buy Kyrie 2 (not this color) for about 2 million if order and 3 million size if purchased in stores.