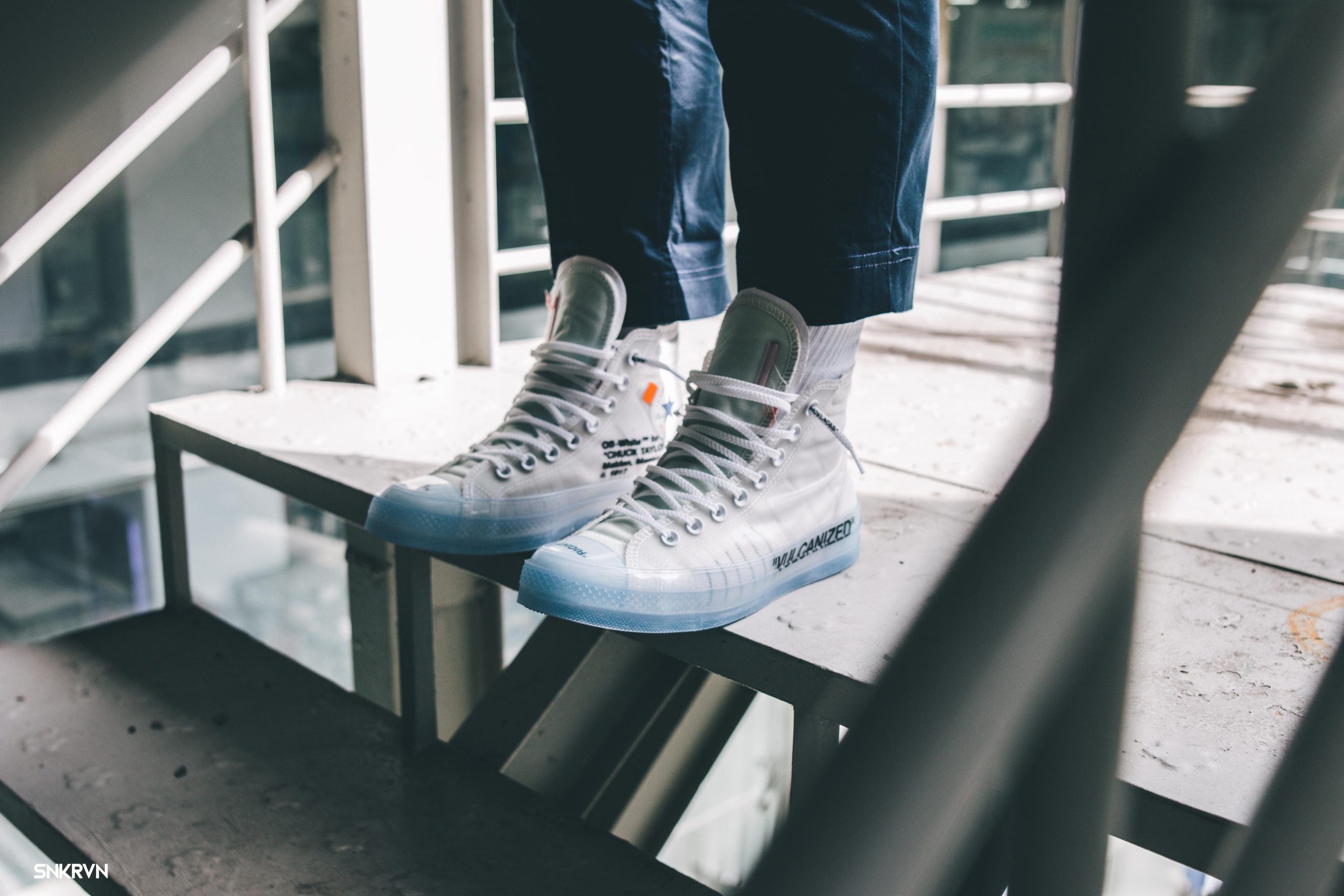 As we all know, the Off-White x Nike collection is an extremely influential one in the hypebeast and sneakerhead world. Last year, we saw 9 pairs of shoes in the collection coming out one after another. By the beginning of this year, the collection’s mysterious character was finally released. It is double Off-White x Converse Taylor All Star High. According to Nike, the shoes had some production problems, so the production was not produced until early 2018. Unsurprisingly, the shoe has been one of the hottest shoes in 2018. Same EACHSHOES Check out this super hot product.

What’s more, the Off-White’s piece of paper is made in great detail. Patterns between Nike and Off-White can be seen on the paper. Don’t forget, this Converse pair will also have a red zip tie. In the 1st installments, Off-White pairs will have 3 sets of strings attached. But currently, ad only has 2 sets of strings.

See more:  10 pairs of basketball shoes that must be in your locker (P2)

When it comes to Off-White, the hypebeast and sneakerhead interest is unquestionable. This Converse version is no exception. Still following the theme of the collection, Virgil will make the shoes feel like a sample or un-finish. The shoes will be made entirely in white. Still keeping the traditional high neckline, the shoes will be a great choice for Converse lovers.

On the outer sole, we will see the word “Vulcanized”, which represents the material of the sole. The sole will be blue, look extremely prominent with the white of the upper part. On the inside of the shoe, Virgil keeps the collection specific when it comes to the place and date of manufacture. We also see the Converse All Star logo printed over the text. Moreover, on the heel part, the Converse logo will be printed in reverse. As usual, as the shoes are white, the highlight of the shoe will come from a piece of orange plastic in the Converse logo. On the reed, we have a “stamp” of shoes that has been torn off. A detail that has never been seen before. As with other shoes, the shoelaces will have the word “Shoelaces”. More specifically, Virgil’s idea in the toe part is extremely creative. On the right one, there will be the word “Left”. And on the left one will have the word “Right”. One detail is too poisonous and strange.

On the upper part, the shoe will be made of transparent plastic. Therefore, if you want to change the look of your shoes, just change the socks. Not only that, this material will be very soft. So it won’t feel cramped or too hugged like other Converse pairs. A thin piece of foams is applied to the plastic part of the tongue. Therefore, over time, the shoes will turn yellow. The base is made thinner and lighter than the normal Converse. Unsurprisingly, the shoes will be more comfortable for first-time Converse wearers.

4. Practical experience and the ability to coordinate

The real feel of the ad when holding the shoe for the first time in hand and on the foot is soft and thick thanks to the thin plastic upper body and the sole made of thin Vulcanized. The slightly stiff, rough feeling when wearing the first few times still remains. Especially in the toe part. However, after about 3 or 4 times of wearing, the upper part will break-in and become somewhat softer and more comfortable. Like other Converse pairs, shoe form will be bigger than normal shoe forms. For example, your shoe size is 8. Then according to the ad, with these Converse, you should buy size 7. Reduce to 1 size too.

The true color scheme and design of the shoe has impressed thanks to its differences from previous versions. With the transparent upper part, your socks must always be “on-point” when wearing these shoes. Fashionista often choose white pants to go with these shoes. But if you want really “stand-out” shoes then dark pants will be a perfect choice.

Due to being the last released shoe in the Off-White x Nike OG (Original) collection. So these shoes are very hype and very much expected by the sneakerhead and hypeabeast brothers. The retail price of the shoe is only $ 130. But the resell price has been increased by 9 times. On Stockx or Goat, these Converse shoes are priced between $ 800-1,600.

Are these shoes that deserve to be in your shoe locker?