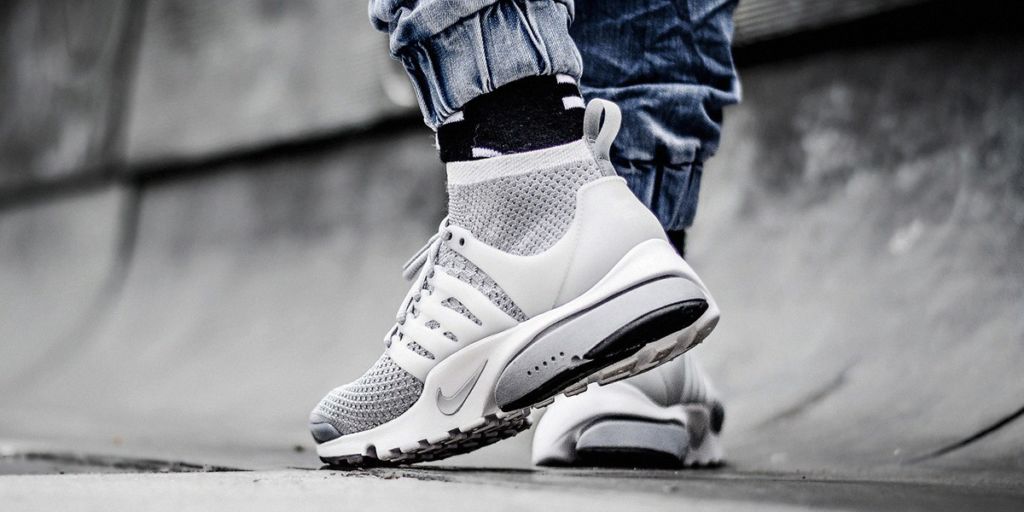 With the strong rise from adidas in recent years, Nike’s number one position has been shaking violently due to the pressure from its competitors.

Therefore, Nike must strengthen its wall to prevent its rivals from surpassing, and that wall is the shoe that has been storming the market recently like the Air Max. , Huarache or Air Presto, …

And below, is a list of 10 pairs launched by Nike during 2017 that EACHSHOES feels is the most beautiful. Everyone, let’s take a look.

It took 30 years from design to release (1985-2015), Air Max Zero was the original basis for the design of Air Max 1. After so many days, this shoe was finally put on. The color “Triple White” is quite popular. Still keeping its modern design, now the shoe features a mesh in the nose area and the heel goes with white color in all the rest. It can be considered as the cleanest Air Max Zero shoe ever.

In mid-January, Nike launched the latest color scheme of the AF1 Ultra Low QS pair to celebrate the Chinese New Year, but unfortunately this version was only released in China only. The shoes are decorated at the top of the laces, the heel tab, the branding patch on the reed and the two outsole ends in emerald green are extremely beautiful, the rest are still white like their predecessor. Jade color represents nobility and is often associated with 35th anniversary, so Nike took this opportunity to celebrate the 35th birthday of Air Force 1.

The running shoe that Nike has treasured over the years has just been released in a brand new “Stadium Green” look. With a white upper with a few gray and black details, along with the words “Stadium Green”, the shoes are an affordable choice for those who run and want to be seen by everyone.

First introduced by Kyrie Irving and carried by Paul George under the name Nike Hyperrev, however both players have their own shoe models. So Nike decided to change direction for the shoe with a completely new design and name – Nike Zoom Rev. With a unique groove base with Zoom Air technology that Nike favors for cushioning and impact resistance. The shoe model will be released this year in two color schemes “White / Pure Platinum / Ice” and “Black / Gum”.

Last February, Nike just launched this product at a pretty expensive retail price ($ 400). Army-inspired from the P-51 flight bomber jacket, this special OG retro edition features a premium construction including leather for heavy duty, leather-covered mid-sole for the first time. , the tongue part and the upper part are also leather. Laser-punched air vents on the sides are accompanied by the word “Flight on lace lock (also leather).” Military inspiration comes from Sequoia blue in the upper and midsole with the contrast from the tan Vachetta’s reed tabs. Finally, the icy sole makes up the value of the shoe.

Following the success of previous versions, this time, at the hands of Ben Kirschner, this version truly holds the military quality exactly as its name suggests. Still retaining the same shape as the tenants, but this version is dressed in Tan color with camo motifs and two beautiful straps around the neck.

Last February, Nike just released a military-inspired color scheme for their recently hot shoe – the Nike Air Huarache. This version has been upgraded with high quality suede with a strong moss green color in the body, frame and shoelaces are also blue. Underneath, the sole is dark black in contrast to the upper part of the shoe.

In contrast to its aggressive look, the Air Max TR17 promises to keep your feet completely smooth thanks to its full-length Air cushion. In addition, the position of the shoelace is very special when it is placed on the cheeks and the tongue is a beautiful ligament system. In addition, the suede upper part with Navy color schemes makes the shoes more unique. If you are someone looking for an Air Max that is completely different from any other Air Max, these are your shoes.

The legendary color scheme players have been looking forward to just revived in April and sold out extremely quickly. Revised for the first time since 2013, this edition is covered in the finest materials. The 2017 version uses tumbled leather with blue and black colors placed on white midsole with blue outsole. Details are meticulously recreated from the OG version. My condolences for those who miss this legendary color scheme.

The last position on this list should definitely belong to Nike Vapormax. An upgraded version of the Air Max series with a full flyknit upper and air bubble buffers. Since its launch until now, Nike has released many beautiful color schemes, but in my opinion, the “Asphalt” color scheme is the best combination so far. This color scheme has just been released online with 3 other color schemes and sold out tchir in less than 20 minutes. Hopefully, in the remaining half year, Nike will launch even more beautiful colorways to satisfy the fans’ expectations for this shoe.