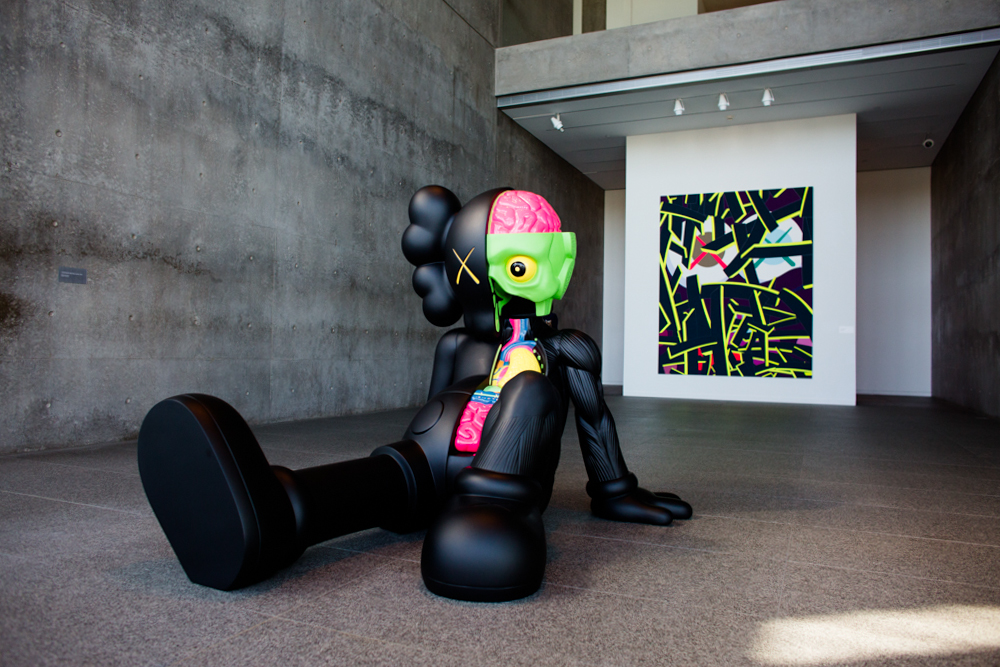 Let’s find out: “KAWS Effect” Meaning – From a New York artist to a global brand

What does KAWS stand for – What is KAWS Inspiration?

Having a passion for luxury collectibles from Bearbrick, you will surely be no stranger to KAWS “Companion”.

Similar to the big belly bear, KAWS is loved by many people because of its distinctive appearance with the skull and cross eyes.

Even Harpersbazaar fondly called KAWS one of the character treasures next to the monument Snoopy, Mickey or the Simpsons.

KAWS not only enriches today’s popular culture, but is also seen as a familiar brand in the fashion and entertainment world.

Most recently, a collection of textured t-shirts in collaboration with Uniqlo x Sesame Street.

Not long after that, KAWS appeared impressively in the Spring-Summer 2019 runway show of Dior Homme. At the same time, this show is also the first collection of Kim Jones as Creative Director of this famous fashion house.

Why KAWS is so popular?

The popularity of KAWS can cause many people to question: Why are people so crazy about KAWS related products

Can anyone buy KAWS, or is it just a character tagged “limited edition” to push the price up as absurdly high as sneakers or other fashion products?

To answer this question, we have to trace back the history of Who invented kaws and how did kaws start?

Who invented KAWS- How did KAWS start

Speaking of KAWS, we must also remind Brian Donnelly – the man behind this cross-eyed character.

In the 1990s, New York City was flooded with graffiti-style ads by street artists. Where there is space, that place will turn into a fancy work of art.

However, unlike other artists who choose the alleyways or under the bridge to delight their creativity, Brian Donnelly made a mark on the billboards and bus stops to portray his character as “The Companion, Bendy. and The Accomplice ”, also known as KAWS.

KAWS’s work in a billboard

KAWS’s work in a billboard

You’d be wondering if KAWS has a special meaning to Brian?

The fact that this is just a name doesn’t mean much. I only see the letters when put together seems to match, so I have used that name up to now.

This is also quite similar to the skull image of the KAWS characters.

At the beginning of creation, Brian had a burning desire, his character must be easily accepted everywhere in the world, no matter how different nationality or culture.

KAWS will become a global figure.

However, there are opinions that KAWS is not as meaningful as Brian sent it.

What does KAWS Companion mean?

“Such a skull covering its face only reveals more death and panic to those who first learned about KAWS.”

What are KAWS toys?

Brian Donnelly had the opportunity to cooperate with a Japanese fashion brand – Bounty Hunter to design a line of toys for collectors.

When first launched, Brian’s products were priced at a retail price of between $ 50 and $ 100 per child. For now, you must also understand for yourself how big the value of these characters has changed.

Given KAWS’s current reputation, every original figure is worth 10 or tens of times more than its original price.

Some toy products of KAWS

With the enthusiastic reception of the public, KAWS – the character name and current nickname of Brian Donnelly, turned to work with formidable names in the entertainment world.

Projects from producing collections of toys enhanced his skills even more.

At the same time, it also motivates him to aspire to more than just be 2D characters as before, such as a 4.6m tall version of his The Companion character.

Since 2004, KAWS has appeared in many works with hip hop artists.

Outstanding works include the covers of Kanye West’s 8o8s and Heartbreaks albums, shoe designs for Nike and Marc Jacobs, collaboration with fashion brands like A Bathing Ape, Comme Des Garcons, Undercover and Vans … There are also designs that incorporate characters such as The Smurfs, Snoopy, Mickey, … and many others.

In addition to its continuous appearance in the entertainment and fashion world, KAWS has also made other communities admire its art works, such as a 4-meter bubble on Macy’s Thanksgiving Day Parade 2012 in New York. .

This is also the first time he has officially entered the mainstream, more widely known. There were even a lot of people who didn’t even know him before this show.

In the interview not long ago Complex KAWS explained about the partnership with Uniqlo: “I feel like I have to do something to get closer and make people more familiar with KAWS. With the current democracy, the greatest reward is a beauty that anyone can feel.

” His most recent work with Dior Homme and Uniqlo UT is also one of the challenges he needs to overcome in his career to create and commercialize his work.